On May 12 in our webinar titled Putting Learners First, VP of Product Marketing Todd Tauber, discussed how the balance of power in learning and development is shifting from HR and L&D to employees and managers. Here’s why we think its finally time to start rethinking L&D approaches and priorities.

1. L&D teams are struggling to connect with learners
People’s #1 job concern is obsolescence. 60% of workers – Millennials and non-Millennials alike – think the skills they have now will NOT be what they need in 3 years (Oxford Economics / SAP, 2020 Workforce). Learning and development are essential. However, in survey after survey, those same workers say the education and training they’re getting at work is not preparing them for whatever’s next.

What’s happening? There are two things are going on here:
– A lot of people simply don’t have access to training; less than half of college grads got any formal training in their first jobs, for example.
-The bigger issue is that a lot of the opportunities people do have are not well connected to their jobs, career plans or work habits.

2. Conventional L&D is too slow to keep-up with learning needs
The proof of that is in the data. Up and down the career path, organizations say they don’t have enough people with the right knowledge and skills.
– Almost 60% of employers think new college graduates are not adequately prepared for the workforce, and many of those kids agree!
– That skills gap balloons as people move into management and leadership roles. 74% of companies report persistent shortages of talented managers.
– 51% of organizations say they don’t have a strong bench of executives.

Why is this happening? The nature of work is changing:
– Routine tasks are being automated. More and more jobs require primarily creative thinking and problem solving skills, not just the ability to follow directions. As an example, think about machine operators. They’re not just pulling levers and pushing buttons anymore- they’re programming and monitoring robots.
-Everything is changing constantly. The half-life of many skills these days is just 2.5 to 5 years. Sales and marketing is another prime example. Data, software, social media and e-commerce have fundamentally changed how people buy everything from books and clothes to enterprise software and jet engines. Those changes and the effects are still unfolding.

Products, competition and regulations can all change in a matter of weeks. Yet, it still takes 5 to 12 weeks to create just one hour of interactive e-learning. Multiply that across a typical company with dozens of job roles at multiple levels, and it’s clear that L&D can’t keep up.

3. Traditional L&D is out of sync with how people really learn
What people learn is only half the equation, though. The other half is how they keep their skills sharp. Traditional L&D practices are stuck, stubbornly, in the past.
– More than 75% of what L&D teams do is still formal training, mostly in classrooms, with instructors. While a growing portion of that is virtual classrooms and self-paced online courses, that misses the point.

-Less than ¼ of workers say they’ve completed an entire course – of any kind – in the last 24 months.

Meanwhile, more than 70% of people say they’ve learned something work-related from an article, video or book this week. 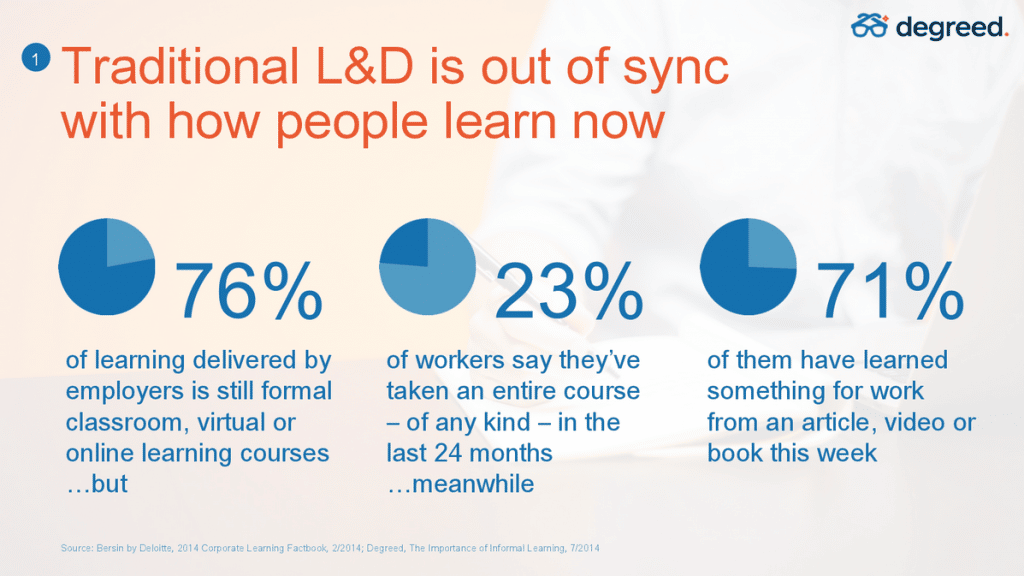 As BP’s director of learning innovation and technology, Nick Shackleton-Jones, puts it: Most L&D organizations are only beginning to think about shifting from courses to performance support. Meanwhile, employees already rely on their networks and Google to get most of what they need informally, in the moment. And they’re starting to integrate apps into the way they work, too.

4. Learners are now empowered to take control of their own learning
The above disconnects are turning into a big problem for a lot of L&D teams because employees and their managers are increasingly empowered – largely through the Internet – to take control of their own development. If they don’t get what they need and want from their L&D or HR business partners, they’ll just go get it themselves. Many already do that. Technology training is probably the best example:
– Over the last 5 years, Chief Learning Officers have cut IT training nearly in half — from 9% of their spending to 5%. At the time when technology has become more critical to business than ever before!
– In response, Chief Technology Officers have almost doubled training, from 3% of their budgets to 5%. Keep in mind IT budgets are generally much bigger than L&D budgets.
– And on top of that, almost ⅔ of IT workers dug into their own pockets for training and certifications.

This is not limited to IT, though.
– 43% of workers say they look for learning opportunities outside their company at least half the time. 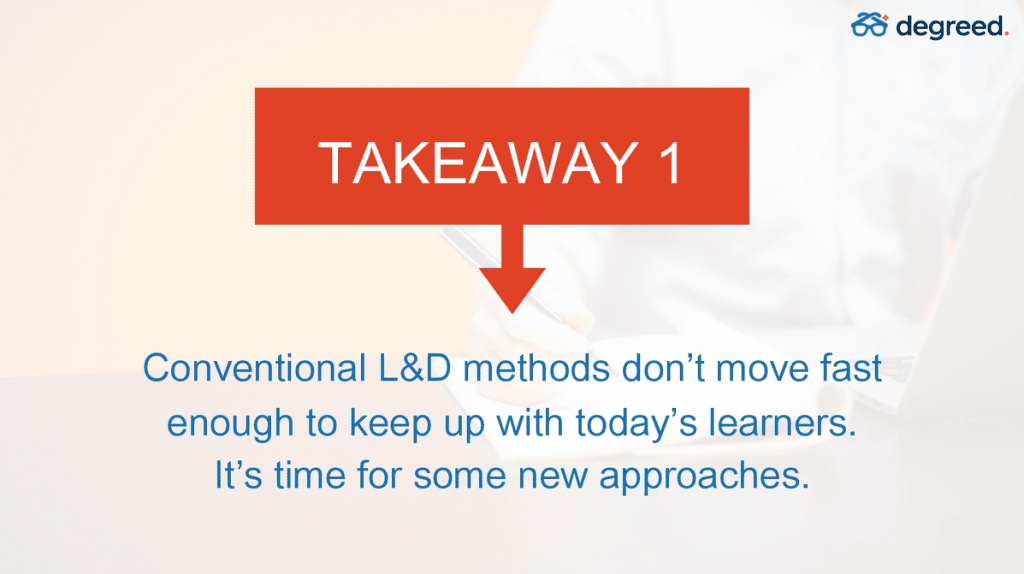 The big takeaway in all this is that conventional L&D methods just aren’t responsive enough to keep up with today’s learners. So it’s time to try some new approaches. That starts with changing some pretty fundamental attitudes about the role and priorities of L&D organizations. You know the issues, and in Part II of the webinar recap we’ll make you ready to be part of the solution.